Go to Menu
go to articles

THE OPERATIONAL COMMITTEES OF SSACTAC

Senior Staff Association of Communications, Transport and Corporations (SSACTAC) as a Trade Union issued her latest Constitution and Code of Practice in 1999. This Constitution is still in vogue and in use.

We presently have the following Committees:

These are x-rayed in rules 6  11 and the government of the Association is vested on these Committees mentioned above and their basic functions are highly elucidated herein:-

This Council is composed of all Principal Officers, Branch Presidents and Branch Secretaries in addition to three (3) other members from each Branch selected geographically all over the states. This Council meets twice in a year on dates and venues decided by the President-General. The Agenda in any Council meeting is approve by the President-General and the General Secretary. Every question at meetings of the Council is decided by a majority of votes of members cast in a secret ballot or by show of hands.

The Central Working Committee (CWC) is made up of all principal Officers. The CWC meets at least once in every three (3) months.

The Branch shall have elected officers who emerged victorious in a Tri-annial Delegates Conference. The Rule recognizes the President, The Branch Secretary and the Treasurer plus any other five (5) as members of the Executive Committee.

The President presides over the Branch NEC meeting and Executive Committee meetings. It is the business of the Branch to see to the proper administration of the Association at the grass roots Chapters.

The affairs of the Association is managed at the grassroots by this Council which is made up of elected officers. The Chairman, the Secretary and the Treasurer plus five (5) others forms the Chapter Executive Committee.

In the Union, there is always the networking principle which is all about Channels of Communication, Unity of Purpose and Solidarity. The Union survives when there is peace, however, whenever there is crisis, it is resolved through realistic dialogue.

Hereunder is flowchart illustrating the networking process of all the Committees: 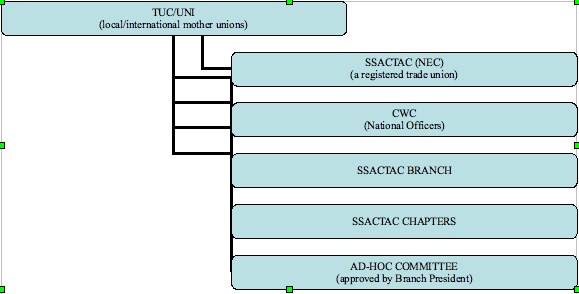