The long awaited Newslink Magazine of SSA-NIPOST, which serves as the platform to clarify convincing issues about reform and other information is out at last.

Nigerian Shippers' Council introduced a magazine called "The Voice" to serve as a platform for information dissemination among workers.
NHF is accessible to NIPOST staff

National Housing Fund provides great opportunities for NIPOST staff to own a personal house which is one of their basic economic needs.

The Central Working Committee of SSACTAC registers its protest to the Management of NIPOST over 3months arrears of 15% increase in salaries.
Concerns over lingering landed properties and other asset of the organization

Failure To Connect To Web Server

From SSACTAC to the Management of NPA

Nigerian Ports Authority (NPA) is one of the branch of SSACTAC, hence, the reaction of SSACTAC to certain factors enumerated as problems causing tension in the work environment.

Failure To Connect To Web Server

Failure To Connect To Web Server
The two unions finally submit what they called their position on the generated postal bill.

Our Position on the Postal Sector Reforms Bill:

Our aim is to help put in place the proper legislation to drive the Nigerian Postal sector efficiently after the necessary reforms.
The only woman that rose to the position of Deputy Postmaster General in the history of NIPOST retired after a meritorious service

REPORT OF THE WORLD YOUTH CONFERENCE IN MALAYSIA 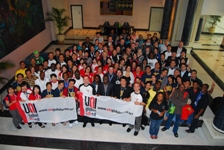 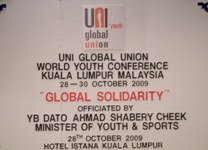 Press Briefing on the proposed reforms of the Nigerian Postal Service
« Anterior [1]  2 [3] [4] [5]  Next »
Trade Unionism is not all about protest, but also a partner in progress of the organization

The global trends in the Postal Industry reveals a poor quality of service, decline i...

The General Manager of EMS Speedpost and his team pay a solidarity visit to the uni...
UNION AND MANAGEMENT HAD INTERRACTIVE SESSION ABOUT THE ON-GOING REFORM IN THE ORGANIZATION

SSANIPOST had its Delegates Conference in September, 2007

New Executives elected to pilot the Association for the next three (3) years.
LABOUR AND THE PROPOSED RESTRUCTURING OF NIPOST