The seminar started with the IUF Project coordinator welcoming participants from the five regions participating in the seminar which aims at enlightening them on some aspects of the labour laws in Ghana.

Adding that women are often found at the bottom of the ladder in most things ranging from leadership roles to even the engagement of girls in schools: this situation has permeated the trade unions to the extent that the leadership of most of the national unions is made up of men. To address this anomaly, the unions have had to reserve leadership positions for women.

The lack of women in union leadership means that, issues of concern to women would continually be shoved to the background. Example is, when it comes to drafting of collective bargaining agreements, it was the men who always engaged in these activities and mostly address issues of concern to them, while a lot of problems confronting women are hardly considered in these CBAs.

In the light of the above, the Industrial and Commercial Workers Union (ICU) and General Agricultural Workers Union (GAWU) in collaboration with the International Union of Food, Agriculture, Hotel, Restaurant, Catering, Tobacco and Allied Workers Association (IUF) ) have embarked on a project to empower unionists, particularly women. The Womens Project organized this workshop to raise awareness of workers, especially women on labour issues and trade unionism at large.

Participants were advised to recognise the importance of knowing their rights, challenges and opportunities as enshrined in the Labour Act 651.

The first presentation was on the Three Tier Pension Scheme, effective from January 2010.

The three tiers were explained as follows:

a. First tier basic national social security scheme, which will incorporate an improved system of SSNIT benefits and shall be mandatory for all employees and employers in both the private and public sectors; (payment of only monthly pensions and related benefits such as survivors benefit)

b. Second tier occupational (or work-based) pension scheme, mandatory for all employees and employers but privately managed, and designed primarily to give contributors higher lump sum benefits than presently available under the SSNIT or Cap 30 pension schemes; and

It was also mentioned that the first tier basic national social security scheme will be managed by a restructured SSNIT; the second tier and the voluntary third tier will be privately-managed by approved Trustees licensed by the Pensions Regulatory Authority with the assistance of pension fund managers and custodians registered by the Authority; the pension fund managers and custodians will first be licensed by the Securities and Exchange Commission and thereafter registered by the Authority.

THE LABOUR ACT 651 AND THE WOMEN EMPOWERMENT

The next topic was the Labour Act 651 and the women empowerment. The resource person acknowledged the women and the roles they are playing at their various unions. She also added that their efforts are yielding positive results but a lot more needs to be done to protect working women.

The aim of her presentation was to

         Deepen the understanding of participants in the labour law

         Show the extent to which the labour provides protection for women

The resource person started by explaining that the Labour Act is divided into 20 parts consisting of 179 sections, and went through some of the sections with participants.

The employer too has rights in the form of

         Determine the type of product to produce, how to sell it and at what price

The resource person enumerated the duties of the employer as

The rights of a worker under the law were explained as follows,

         To work under satisfactory, safe and healthy conditions

         Equal pay for equal work without distinction of any kind

The duties of workers was discuss that they should,

         Take all reasonable care for the safety & health of other workers

The resource person stressed that employers are using their rights effectively so workers must also know their rights to use them effectively too. Employers have introduced so many unorthodox means to be able to favour some workers. When employers formulate policies without the input of workers, then the workers are expected to act like robots at the command of the employer.

The law however protects women workers in the form of employment and maternity. Under

         Seek redress from National Labour Commission in the event of violation

While on maternity leave, the worker is entitled to all benefits eg, full salary or wages, bonuses and other awards

Entitled to an extension of maternity leave period up to 2 weeks eg. where twins are born or there   are complications

No redundancy for worker on maternity leave.

As the pregnant woman worker cannot work between 10pm & 7am without her consent, she could be consulted for her consent.

The resource person pointed out that apart from the opportunities under maternity, the law does not really protect women. For instance, under forms of employment such as casualization and contract work, women are not protected by the law. As a casual worker, the number of hours worked determines how much one is paid; less hours less pay, thus the casual would work more hours for more pay, a choice that the law does not protect. In some cases women are even afraid of becoming pregnant for fear of losing their jobs or postpone getting pregnant.

She therefore urged women to acquaint themselves with the labour Act, be interested in the things that affect them at the workplace and participate in union activities because the Union can protect them.

The Project Co-coordinator also promised to send soft copies of the Labour Act by mail to participants, who have access to the internet.

3.                  Women should familiarize themselves with their various workplace CBAs and lobby their local unions to have their needs addressed. 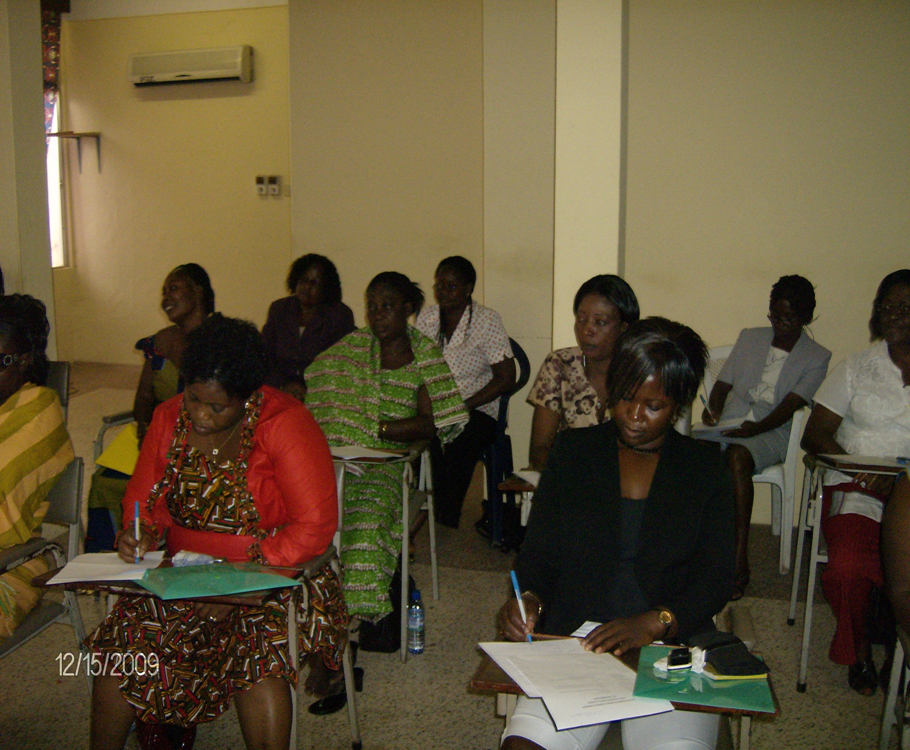