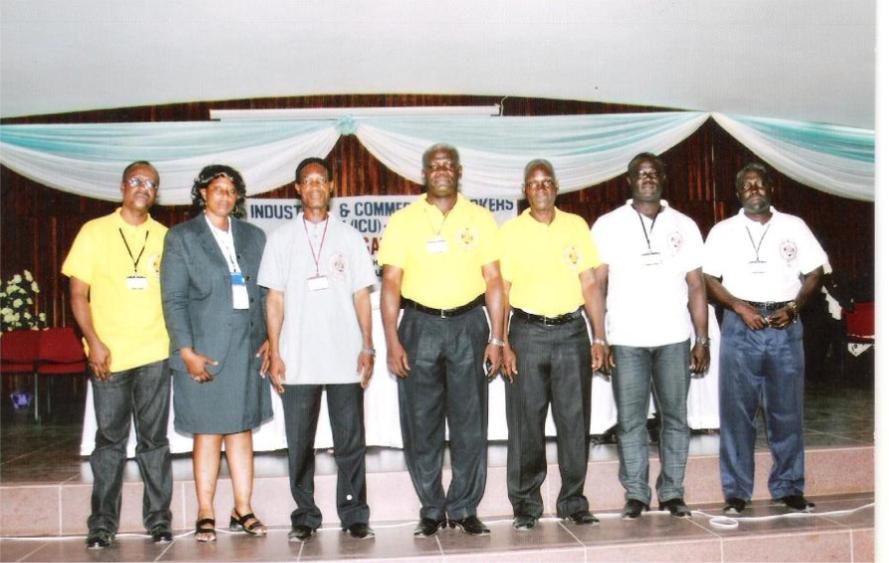 If you have ever seen an army of ants building an ant hill you will understand the power of unity and its associated benefits and you will more than agree with W. Durant when he said that

ICU has suffered a number of disturbances from August 2003  2007 where it lost over 5000 of its members in the financial institution as a result of break-away. Things have not been very smooth for the union, even though the Union proved sceptics wrong of their predictions its fate as it swam through the rapids of the court suits brought against it by the former Gen. Secretary, Bro. Napoleon Kpoh. The Union was saddled with a number of legal battles; fortunately, the issues became an acid test for the unions constitution which had not seen such tests in years.  The overall judgement went in favour of the Union.  Within the same period, the union has had to battle   Barclays Bank Ghana at the Accra Fast Track High Court and Appeal Court for close to one and half years concerning the dismissal of 8 local union executives which action the union considers wrongful.  The final determination of this case is currently lying with the Supreme Court.

One does not need a microscope to see and understand that when an organisation is confronted with such unforeseen challenges, irrespective of the income of that organisation, its budget will definitely be thrown out of gear, thereby rendering every plan of the organisation to run on serious budgetary constraints. Such was the situation ICU found itself around the time. The Union's plans for staff and general membership were seriously disturbed in a manner that called for some emergency measures to salvage the situation. Thus the leadership at that time proved to be versatile during the circumstances.  And for once there was no withdrawal and break-away from the Union.

A number of unions, the world over, trace their root to some other unions or a union. In recent times Trade Unionism has suffered quite unfortunate evil of break-away syndromes. This unfortunate reality facing contemporary trade unionism seems to be gaining popularity, probably spelling our own doom in the face of the numerous challenges that Trade unions have had to handle as labour issues become more complex.

ICU has been a victim of break-away, probably; the least talked about it the better. When the Napoleonic court battles started. There were a number sister unions  in Ghana who were so much concerned about the unfortunate possibility of  history repeating itself , that is, the fear that the situation was likely to lead to another break away. If that fear had galvanised into reality, it would have been a blow to the union. Not just a blow, but a very big blow, the ripple effect of its consequences would have been very difficult to repair. Thankfully, our fears, their fears, and everybodys fears did not materialise. It is believed that ICU (staff and Members) have never been seen to be more united learning from the past. Somehow the instinct of the need to see to it that we do not end up sacrificing the hen that lays the golden eggs on the altar of nothing, was more at work than one could imagined.

An Interim Management Committee (IMC) was set up by the NEC to manage the union to ensure that the 8th Quadrennial Delegates Conference was organised in good time. The chairman of the IMC was Bro. Gilbert Awinongya, who was the Deputy General Secretary responsible for operations during Bro. Napoleon Kpohs administration. The IMC did a marvellous job of steering the affairs of the union to the admiration of all members, sympathisers and admirers.  This was achieved as a result of the leadership embarking on educational tour in all the ten regions meeting it general membership at the grass roots level and did explained the circumstances leading to the decision of the National Executive Council on the expiration of the then leadership term of office.  The Interim Management Committee (IMC) made categorical statements on how the former General Secretary Napoleon Kpoh could not come into terms with the National Executive Council invoking a constitutional clause on expiration of tenure of office of elected officers but rather decided to sue the Union that brought him from nowhere into lime light, a very sad situation indeed.

Unfortunately, just as the NEC thought everything was alright and that the UNION could have its 8th Quadrennial Delegates conference from 13th January to the 15th January 2009 without the usual problems that characterises such conferences, NEC discovered with shock and dismay that Bro. Napoleon Kpoh has filed another rate that was going to cripple or probably break the backbone of the Union and render it motionless. This time by some strategic legal manoeuvres Bro. Napoleon was able to let the Fast Track High court restrain the UNION from holding elections during the conference , however, the Union could conduct all businesses of conference except elections.  On that score, the Court demanded an undertaking from him  that should he loose the case, he was going to bear the cost of an Extra Ordinary Delegates Conference purposely for elections, and this he did.   As at now the court has fined him an amount of Sixty-one Thousand Nine Hundred and Seventy-three Ghana Cedis (GH¢61,973.00) which is equivalent to Forty-one Thousand Three Hundred and Five Dollars and Thirty-four cents ($41,305.34).  Currently the Court has served him notice to settle the fine.

Conference sitting from the 13th  15th January, 2009 giving full respect to the court orders to the Union not to conduct elections at the conference decided to make the following appointment as below:

As at the time of filing this documentary, Brother Napoleon Kpoh has gone to file another writ for stay of execution on the fine imposed on him from the Fast Track High Court.  Hearing will soon commence at the Appeal Court.

Stay in tuned for more.